I just went back home for a week and usually 1 tax means BUY ALL TEH THINGS!!!
But amazingly all the makeup I bought was the newest Kat Von D palette, Ladybird.  I've never bought any of the palettes before even though Memento Mori tempted me hardcore, but I walked away. And then it was gone and I was all NOOOOOOOOOOOOOoOOooooooo.
BLAH BLAH BLAH
I bought this one though because of all the pretty mattes and the red shade Cleopatra.  There is only one good shot of the look I did because my lighting was balls and I had my mom's lens on my camera which made the beast weigh more than usual for my cruddy always sore wrist I never bothered to get looked at.  Awkward shot is awkward. 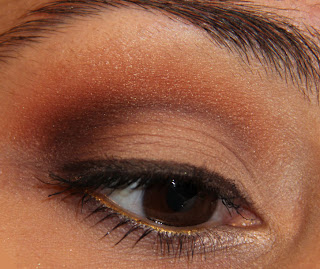 I used TFSI Lemon Drop to prime and the palette in the following order:

1. I put Harlow on the lid *edit - that didn't look right, I think I used the one to the left of 1 "Unrequited". Meh, doesn't matter because step 5... :D
2. Fur Elise went in the crease
3. Cleopatra was blended into and above Fur Elise
4. Wolf was patted in the outer corner and crease to darken a bit more
5. Vespertine was patted all over the lid on top of Harlow (or Unrequited...), I wanted a better contrast. It was also used on the browbone.
Upper eyeliner was Immortal Love, it came with the set, it's also smeared below, waterline is UD Honey and lower inner liner is UD Midnight Cowboy.