"I don't know. It's snowing out. Do something cold looking."

I really should know by now not to ask the dude for what colours to pick out.  Most of the time he says random stuff like "red, yellow, brown, green..." and he'll just go on until he's listed them all.  This time he said something "cold looking."

I didn't want to go out for dinner looking like a frost queen but when he mentioned snow I remembered I had a whole bunch of Meow's Snowflake shades from past winters!  I dug around and picked out a few and this is what I came up with.

I took a bunch of pictures but I think this one turned out more clear than the others.  NEED MOAR DAYLIIIIIGHT! 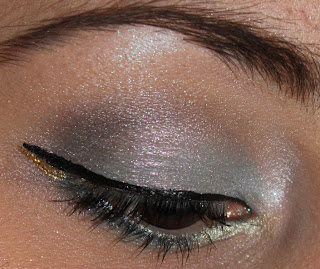