I came home to 2 packages today! (first one so adorable it gets 2 pictures!) 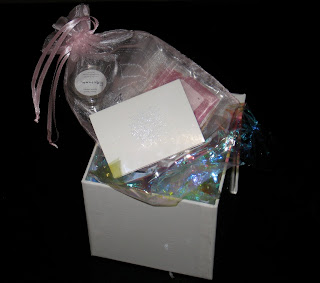 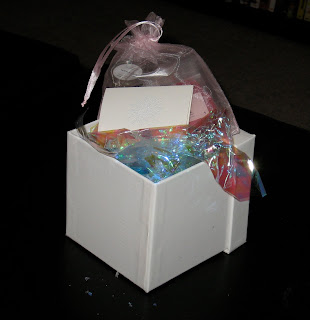 I ordered the entire holiday collection from Stardust Cosmetics. Shipping only took 5 days. I have the super fortunate benefit of being in the same country as them so 5 days is like rocket speed compared to other orders I've placed from other companies!
It came in a cute little white box filled with iridescent wrap stuff and flakes (so pretty! Although super mega heavy duty vacuumage will be going on tomorow:) I also ordered a full size of Equinox (I saw Jenna use it in a tutorial and I had to have it) described as "Blackened gold with gold mineral glitter. Perfect for a night out!" Hellz yeah it is! I think I'm going to wear this for my mister's work xmas party. It's a dark greeny colours with lots o glittah! I luvs me glittah! :D She upsized me a super size pot of it and Cashmere Mittens. I was so happy, it really was like opening an early Christmas present! I also ordered some samples and got 4 freebie samples as well. I love the size of the baggies she uses. I don't like some of the baggies other companies use because It's a bit hard to get the product out when you have to sort of dig it out of the bottom. I think these ones are maybe 3 inches by 2.5? I dunno. I'm Canadian. They be little. I've only swiped Equinox and Cashmere Mittens. Both.are.awesome. I will do swatches but I'm running out of time tonight because I got a second package today too!

Almost forgot to add: Stardust Cosmetics does sell unblended minerals BUT she mixes it with a binding agent so it's wearable, not just straight mica. AND these unblended minerals are labeled with an * so you know what you are buying. I agree that some mica colours are super pretty on their own and don't need any other colour added to make them beautiful and, bigger bonus with that binder added :)

(If one of the pics is sideways It's because I'm dumb and don't know how to permanently fix it on a macbook. Oh photoshop, I miss thee and your simple ways) 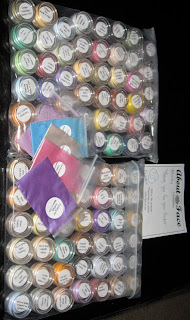 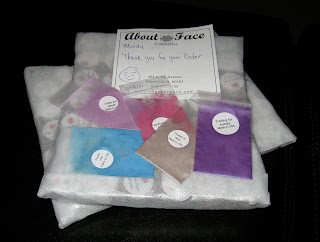 My She Space order! Still a bit confused that they seem to have 2 names. About Face and the She Space. I like saying She Space better :)
This was my order from the Birthday Blitz that happened in October. Order date Oct 17 (see what I mean? ROCKET SPEED STARDUST IS! Yoda I am apparently....) So little over a month's time to get to me. I blame Canada Post and border crossing rules and the fact that my order was pretty insanely huge. 88 pigments I think (I'll double check in the morning) I went through and made sure all the lids were still on tight. Thank whatever was looking over my order that most of them were. The jars don't have sifters (I like this, sifters are evil) but I'll have to go through them with tape to stop an unfortunate makeup bomb from going off. The jars are a bit smaller from Aromaleigh jars. Some of them (I think 5 or 6) were in slightly different jars. They didn't have that hollowed scoop bit in the bottom. They may have the same amount. I don't have a scale so I can't be certain. I'm most upset I didn't order Smurfberry Blast, and some greys, hot cha cha and, meh probably like 15 others hahaha. I'm pretty sure I'll survive on what I did get. Besides, holiday sale is in effect (not as cheap but still only $3.50 each).
They also gave me 5 free samples (all ones I would totally wear too!) More info on those later gater.