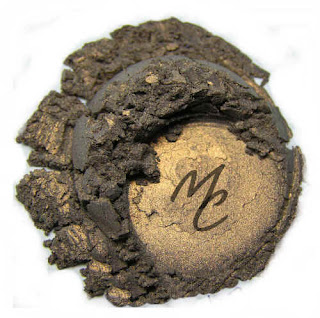 I promise I'll do more looks with colours that are actually still available :D
But not today!

I really liked this one. I thought I wasn't a huge "blue" fan, but I realized I love all blues except navy (I don't know why, something about it looks like a big ole bruise on me so I pass)

I used Meow Cosmetics:
Friday the 13th in Spell on the lid (chromatic cerulean blue with green iridecent fire and aqua glow)
Friday the 13th in Accident in the crease (metallic copper lame with a dark undertone and gleaming metallic iridescent fire-Wetlines:RED!)
Dance of Death in Spellbinding to hilight (white shadow glistening with surprising multi colored sparkle and iridescence - it's positively ghastly)
Dance of Death in Coffin eyeliner (coffin-copper shade with metallic umber undertones) The bestest!

I included a picture of Accident so you can see the difference from computer screen to eyelid. It's a really pretty difference but it just shows you don't know until you swatch it.