I just went to the mall to get new shirts to destroy at work and made the mistake of walking past the MAC store.

Ever since seeing this post on Temptalia I knew I wanted at least 3 of them.

I know she did wicked awesome swatches already, but I still feel the urge to show you mine :) 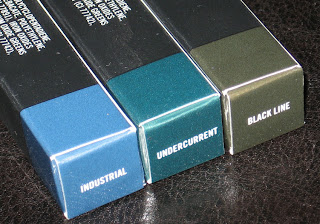 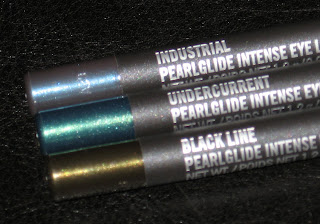 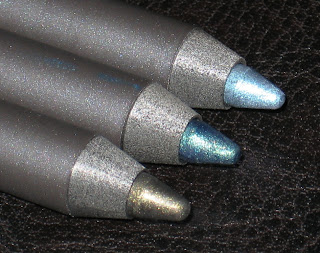 Those are weird ass descriptions. Just check out the swatches and make up your own, you'll probably do better :D

I found them to be soft but not as soft as the Urban Decay 24/7 liners. I know some people don't like the UD liners for that reason, so these ones would be good to give a try. That, and the shades are FKLFVJNJDF AMAZINGSAUCE!

I don't know what they are cost wise to the rest of the world, but here in Kittehland aka CANADUH they be $17.50 each. Uber pricey but that's just 50 cents more than the UD liners anyways.

I'd re-buy if something terrible happened, like my apartment was attacked by zombie penguins in jetpacks and they stole all my makeup and I had to get some of it replaced. I'd buy them over the waffles they no doubt probably stole as well. Eyeliners are edible right?

One thing I'd suggest is maybe not use them on your waterline. My eyeballs can take loads of crap, the only thing that ever irritated them was actual glitter chunks on my cornea, but for some reason I wore Black Line on my waterline and it was instant "allergy-eyes" for me. The box doesn't say not to use it there like my Too Faced liner warned me, so give it a go if you wish. You just may wreck your HARD WORKED ON MAKEUP JOB THATS ALL! teeheeee :) 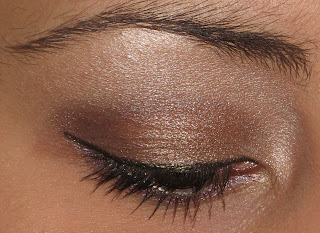 I have no idea what to pair the other 2 liners with. Yellow or pink are the only 2 shades coming to mind.