I was in Walmart yesterday to check out their Halloween goodies, and I'm not talking candy.

I found 2 displays of ass kicking lashes. Even though I don't wear them every day, usually just holidays or if I go out partay-ing it up and feel the need to be extra flashy. You know, cuz hot pink shadow just isn't enough sometimes.

I ended up with doubles of 3 pairs because they seemed reasonably priced. They were all under $4 (Some were $3.77 but can't remember which, receipt is gonners).

They also had these uber fantastic Spyder Woman lashes, as well as Pixie Dust and some other super sweet glittttah pair but and a cool pair that was black with a bit of white in the tips but Walmart wanted a hefty ass $9 somethingorother. I'm not paying ten frikkin dollars yo!

And then I saw this photo.


So I googled my lil heart out and found Madame Madeline. They had the fancy schmancy ones minus the white tipped ones but that's okay, cuz I totally bought 3 other pairs of something else instead.

Best of all? $5.35! That's it! After buying doubles of the 3 I originally wanted plus 4 others (which were even less than $4), shipping to Canada was only $5. In the end with shipping they come to under $5 a pair. Mucho better than Walmart.

I'll let you know when they actually get here though and if I get what I ordered etc. But for $-wise, it's pretty damn sweet.

Here are the ones I bought yesterday though. The ones on the bottom are white with holo glitter lightly dusted on top <3<3<3! 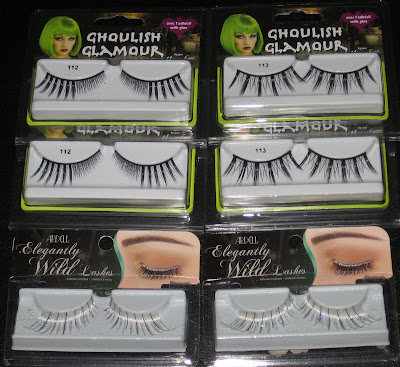