I was bored so I thought I'd show you my favourites from the halloween collections Meow Cosmetics released last year, and luckily, THIS YEAR!! YAY!!

Looking over my pictures I did forget at least one, but it was in a baggy and therefore, forgotten! Poor baggies. They go to makeup limbo. I have some good stuff in there but unless I see it in it's jarred glory, tis forgotten :(

DAMMIT! Going through the colour charts I forgot another that wasn't in a bag, I'm just a turd. I guess I'll have to do a part DEUX!

If you kidnap my brain, here are the colours you would love the most. As always, click the pics again and again to blow them babies up :)

Swatched on primer above, FPE below

Top group:
Full Moon - Zombies, "White that actually glows yellow with subtle blue undertones." Yup, at first I though it had a bit of green in the sheen but when Meow's site mentions blue, it makes sense I'd see that, yellow and blue make green. I R so smrt.

Skelecat - Zombies, "White with gold and green iridescence" This one to me looks like a cream colour when the light doesn't hit it, but when it does, BAMMO! GREEN! I love it.
Full Moom, Skelecat and Spellbinding (my forgotten jarred beauty) are my pics for highligher.

Broken Mirror - Friday the 13th, "shiny silver with green iridescence and multicolor fire" from certain angles this shade looks a bit purple with that lovely green on top.

Spell - Friday the 13th, "chromatic cerulean blue with green iridecent fire and aqua glow" LOVE IT. Remember, I'm not too fond of blues most days. Can't risk resembling a prostitute in the 80's but this blue really is magical. This shade looks best over FPE to keep that green overlay trapped in.

Witch's Brew - Zombie, "Bright acid green". Exactly. Although it is a bit matte. It gets a bit muddy over FPE, but that can also be the colour itself. It does remind me of a grubby witch. In a totally cool way of course, or it wouldn't be in my picks! :)

Supernatural - Friday the 13th, "golden celadon green with orange/pink iridescence and fire" I don't see much green for this one, more of a really unique golden shade with that orangey-pink iridescence mixed in.

Bottom group:
Skeptic - Friday the 13th, "this one will make a believer out of you! bright periwinkle with copper and pink iridescent color changing fire" WICKED! This one is also best used with FPE to get that pink to stay. Also, my brush was a bit damp and I found this made the pink stay even better. I will try that with Spell one day!

Cadaver - Dance of Death, "a creepy sage toned organic green with golden iridecence" This one has always been one of my favourite greens. It just seems to have so much in it that sets it apart from other greens. It also has teeny blue sparkles in it, so small I can't actually tell if they are green or blue, but there's something in there, and it's awesome.

Asylum - Dance of Death, "gleaming teal loaded with green iridescence and blue and green sparkle" Another blue I <3, I think I learned that if you pack a blue shadow with awesome sparks I will wear it, or at least gawk over the jar. I bought this with my 2nd halloween order last year because in the bag it looked blah but once I swatched it, I was kicking my own ass and had to make another order. And I love the name. Asylum's creep the hell out of me. The stuff they would do to "crazy" people back then are scary as fuck.Blood Lust - Zombie, "Coppery Red with gold iridescence" It's not a true blood red like you'd expect from such a name, but still really pretty red. I would pair this with a gold like I did here

Coffin - Dance of Death, Liner, "coffin-copper shade with metallic umber undertones" You already know how much I love this one. I even have a back up from last year in case I ran out. Looks HAWT with blue shadows as seen here because of it's dark red tone to it.

Accident - Friday the 13th, "metallic copper lame with a dark undertone and gleaming metallic iridescent fire-Wetlines:RED!" This one is the most tricky shade out of my entire collection. It looks like a cream shade with a slight coppery red to it but once on skin it darkens like mad and the red pops out. I used it as the crease here
NICE! 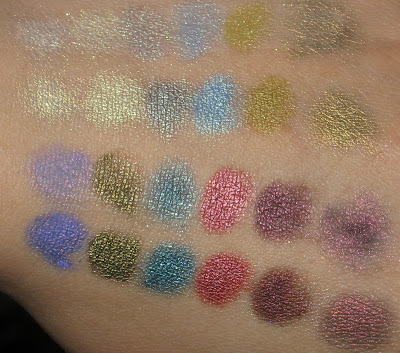 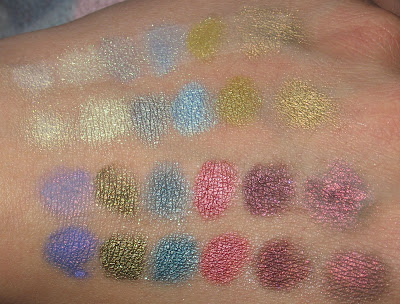 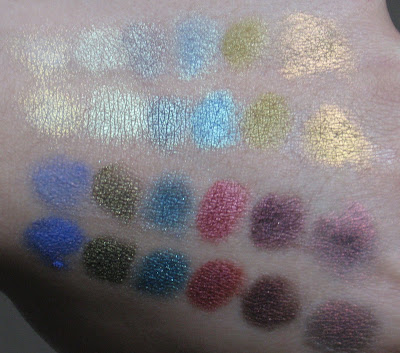 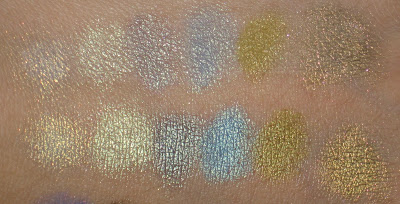 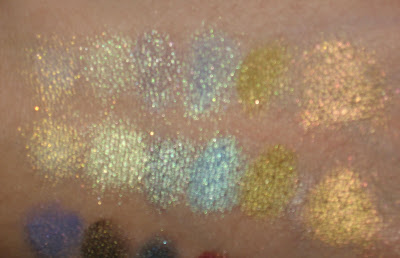 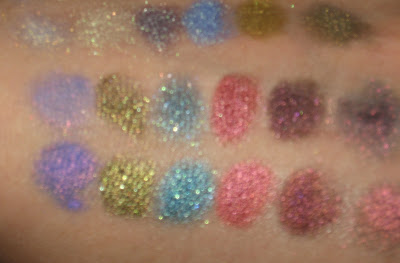 I'm still, STILL working on that giveaway winner. I made it too hard by making extra points because I have to double check everywhaaaaare. OYE! But I'll get to it. I am the queen of procrastination. High school sucked for me. We were on the Copernican scale, not sure exactly what that meant but I had only 2 classes a day until the next quarter. So if I had a project I'd tell myself, meh I'll do it for homework. When I didn't do that I'd say, MEH, I'll do it in the morning. I'd skip that, MEH, I'll do it in first break or lunch. DAMMIT CLASS IS IN! Oh wells, I have another break coming up, I'll do it then. I'd wait till the friggin last moment.

That's how I roll.

Whoops, forgot to give shop links!

AND THERE'S MOOOOOOORE, 3 Alien colours that were missed the first round:
Xenophobe
Area 51
Gray Matter