What I did for my cousin lady's wedding!

First off, not my best work. I was extremely rushed and didn't have a plan. At all. She (my awesome cousin bride) wanted us both to have smokey eyes and I did my best in probably 10 minutes. I've never put makeup on so freakin fast in my LIFE. And that's including foundation and blush. I just knew I had to get it done and do hers still as her hair was getting done.
We missed out on the hair appointment so we were literally running down the Vegas strip trying to find a cheap salon or a friggin curling iron! Walgreens saved the day!
After I did my makeup we had something like 40 minutes until the limo came and it didn't pop into my head to do her makeup at the SAME TIME as she's getting her hair done for a few more minutes still. DDDUUUHHH on me.

Double duh on me because I FORGOT TO TAKE PICTURES OF THE BRIDE! I frikkin fail so hard at this point, but really, just glad we managed to get 3 hair do's down and 2 faces made up and us dressed in under an hour.

So here's what I used for both of us. 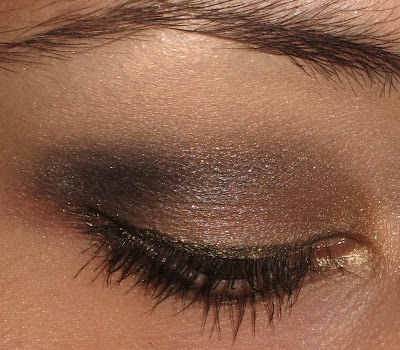 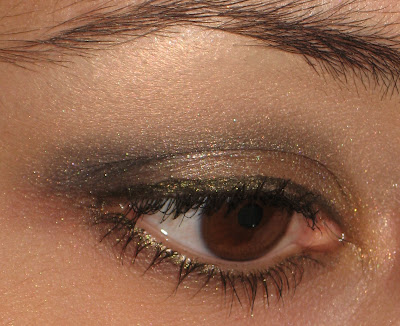 Ick, even my brows look like crap. Oh well :D
My cousin loved it so much she managed to stalk down 2 Black Line pencils and was able to order Spider Monkey right before it was taken down on Meow's site last night. I did good, I was able to link her the pages and find her the sale coupon in time!! Go me! :D I am the greatest enabler EVAR!

Speaking of awesome things. Returned my 2 MAC Mineralize shadows that looked like my Meow ones, got my money back, bought a book and placed a Fyrinnae order and still had $10 left over. Rock.and.roll.