Pet Peeve, Girls who wear makeup are are insecure

I really do get annoyed whenever I hear that people wear makeup because they are insecure and don't like showing what they actually look like.

Well buddy, wearing makeup is what I actually look like because it's one of those things that make me, me.

I wouldn't leave the house without brushing my hair, does that make me insecure also? What's so wrong with wanting to try to put your best face forward, even if it's not perfect.

Makeup is fun, it's a little escape from the boring things in life, work, taxes, bills, reality tv... and it's something I get to play with everyday and I feel very lucky for that.

Have you ever tried to put makeup on someone who doesn't wear any? Or do you remember the first time you wore some?

I do, I was 12 and wore brown eyeliner and mascara. It felt weird and uncomfortable. But it's because I felt I looked different than normal.
Now, it's the complete opposite. If I don't wear makeup, I feel weird and uncomfortable just because I know people are used to seeing 1 face, my made up one.
If I don't wear anything, I get comments, "gee you look tired". Thanks.
So I'll skip having people wondering if I am sleepy or not, by not skimping on foundation and mascara.

I remember getting teased the first time I wore blush, the first time I plucked my brows. Those same people are the same that make the sleepy comments when you go without. People you know will talk about other people no matter what face you put on. The part to work on, is not giving a shit what other people think. It's hard but once they are done spinning their little gears, they'll move on to another topic.

I know strangers won't care either way. Can you remember a single face you saw yesterday that wasn't a co-worker or family member? Meeeee neither.

Sure without makeup, I feel like a troll. But you know what? I have days where I feel like an ugly troll WITH MAKEUP! It goes both ways. Only one face took longer to achieve temporary disappointment.

Everybody has a hobby, my older brother does sketching, younger brother fixes/makes cars cooler (he's chopping a rat-rod), mine is playing with makeup. The colours, the finishes, the sparkle. I love it all. There's nothing wrong with that. Sure if my house burned down and I lost everything, one of the things I would miss would be my collection. Not because I couldn't do my face up, but because I spent so damn much on it and most of it would be impossible to get back. Yeah, I'm pretty material like that. I'd also be sad my perfume probably exploded and perfume has nothing to do with appearance. Not to my boyfriend anyway, he can't smell anything most of the time. But that little collection has been going on for years. I have some good stuff in there! To me anyways.

It's like if a person who loves beadwork had some kid come in and smash down their wall of beads. They'd be pretty upset. All that time and money, all over the floor, mixed up. Good luck sorting seed beads :s

Yeah, in the end it's just stuff. But it's stuff I really like, that just happens to go on my face. If I wanna go out bare, I'll go out bare. Not likely, because then I wouldn't get my playtime in!

I'm sure some people who do wear makeup are insecure but some bare faced people are too, it goes both ways. Don't just assume that because I wear bright yellow eyeshadow, that I'm trying to hide something. You know what they say when you assume, you ass.

So as my big FUCK YOU to whoever says that chicks who wear makeup are just wearing masks to hide their face, here's my bare face. Nothing to hide. It's now in the interwebz and I am fine with this. 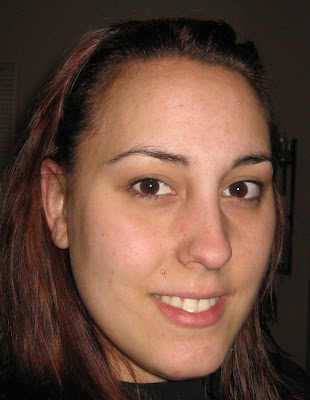 Nothing special. Spots galore. Hello uneven skin to the max. I even kind of look like a dude. So it's my mini challenge to make it even. To improve. It's fun! I wouldn't blog about it, if it wasn't!

I've seen other awesome blog ladies with their bare faces, Phyrra, BLIX, Heather for her concealer review, and they are still beautiful, makeup just makes us a lil sparklier that's all :) And sparkle kicks ass.
Posted by KittenMittens at 10/02/2010 10:18:00 AM