Remember when I was all boo-hoo-y about Walmart wanting almost $10 for super awesome lashes and I was like OH NOES YOU DON'T!

So in my google search and finding Madame Madeline I GOT MY ORDER!

I placed it Oct 10. Received an email saying it was shipped on the 13, which I think is awesome. It was nice to know this info. Items arrived yesterday Oct 26 which is around normal time for Canada. The package had "France" on it instead of "Canada" so that may have delayed things a bit until they looked at the postal code.

Either way everything arrived intact and just what I ordered :)

They were even really kind and sent an extra pair of lashes that I didn't expect! 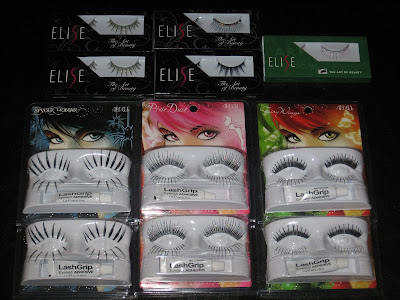 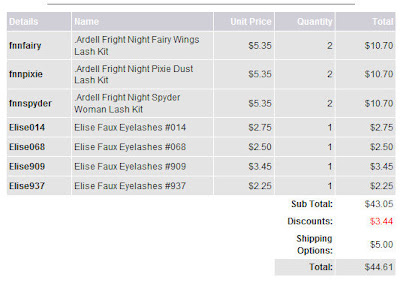 The Ardell Fright Night kits are the bigger ones you see. They were DIRT FRIGGIN CHEAP. EFF YOU IN THE FACE WALMART!

I'm not sure which Elise lashes are which. The $3.45 pair is the set at the very top centre with the little crystals. And the lashes in the green box I grabbed just to see what they looked like in real life. The picture (12th on the page) made them difficult to tell. Most lashes you click and you can see more detail. These ones didn't have a 2nd picture so I was curious. But they really were that light! 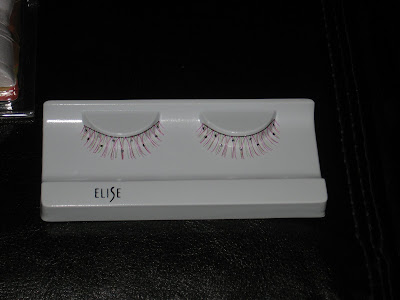 Click to make everything big, but these are pink with bright green throughout. They are very, very fine so it is hard to see but they are still cute! They won't add volume but it's a fun accent to add to what you naturally have.

Of all the lashes on Madame Madeline's site, the Elise ones look the most fun for the prices.

Also something I've never seen before, COLOUR individual lashes. And I'm not talking brown either. Like rainbow shades yo! Yeah I'm super new and some of you are like "uhhhh chickie those be not new" but they are awesome and cute and IWANTTHEMLIKENOWOKAY! All of them! That link is just for the one set, there are like 5 other funkified colour mixes available too. Just imagine doing a neutral look, maybe some greys and then BAM!!! RANDOM RAINBOW LASH WHEN YOU BLINK. Oh yeah. I sees it.

Another sweet thing about the shop is they'll let you know if the pair is comparable to a MAC brand or Sephora etc. in the product info.
Like these bad boys, they let you know the are similar to Makeup Forever's "Erin 115" lash. Which by the way is $15 cdn, while Elise @ Madame Madeline is only $3.75!!!

And all those lashes, and I only paid $5 for this order. And it was marked very kindly for international customers, if ya know what I mean ;)

I am ordering again once I have some moola.