If anyone is curious about the Glittersniffer scamaramma here be some links to check out.

GlitterSniffer Complaints
Glittersniffer Cosmetics Scam Report
Paypal Forum
A facebook user's reason for no longer supporting GS along with uber comments from other previous customers.
Phyrra's Experience
Rebecca's Experience
Dominique's Experience
**Youtubers start to question Glittersniffer
And last but not least, some screen caps of junk cuz I like 'em.

**Images were re-posted with faces and names blurred because half of them got removed. I thought it was funny that the 2nd part of the "Statement" got removed because I underlined the part where she mentions not having a business license, but when I first posted the 2nd part of the statement along with all the replies, that one is still up there. (Wow, how's that for bad English. I suck at explaining, you know me :)

No worries though, it just made me more determined and I posted a couple others just for wasting my time. Vegan brush "torn" decision, buy shadows "at own risk", mentioning that she "knew the ingredients weren't eyesafe" (I underlined that one too, there is a blogger out there who was "Assured Lela did not know") blahbiddyblah.

Also, the images were pulled off facebook, privacy is already invaded when you post on something the world can see anyways. Or was able to before Lela deleted that post to make it look all new and shiny and drama free again...


I am sharing because consumers have a right to their safety. I'm tired of people thinking they can make a quick buck and throwing a bunch of shit together in a pot without proper KNOWLEDGE, at the risk of people's eye safety.
And then KNOWING DAMN WELL things are questionable and DOING IT ANYWAY.
People like that do not deserve second chances, or 3rd, or 8. 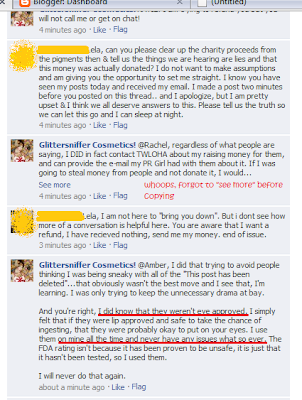 Not everyone remembers to google a company before giving them a shot so I'm sure there are people out there who have bought from GS and still have no idea what's going on.

The "little girls" kits are on that list of recalls!

Just sick. Feel free to yoink away at my photobucket images and share. I don't mind.


But first, a picture of my aunty's piano lookin' all Christmassy and stuff. A nice, calming picture :D 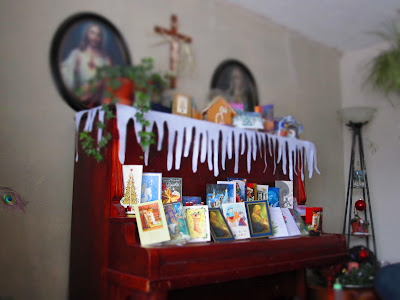