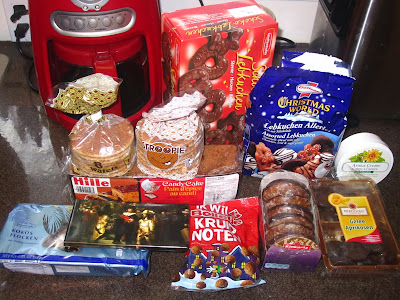 CANDEH!! Being half Dutch, I always get excited when we go to Dutch or German shops because they have the good stuff, JUNK FOOD! This is the stuff I grew up on.

All this, including the big jar of cream was less than $40, it shocked the hell out of me. I totally expected more for imported awesomeness.

A lot of cookies I just call Dutch gingerbread. It doesn't taste anything like the stuff you make houses out of. It has cinnamon, allspice, ginger, nutmeg and cloves and it's squishy, not rock hard. Except for the ones in the little red bag front centre. They are more like little gingersnaps. NOMZ!

And the "Candy Cake" isn't a cake made of candy but it is Dutch breakfast cake/bread with chunky burnt sugar on top. We eat this with butter or margarine. Sounds nasty, I know, but it's GUD!


And saying that I just realized I forgot to buy some more chocolate spread :(

It's the european version of Nutella, minus the hazelnuts. Pure chocolatey goodness.

The 2 packages on top of the candy cake are STROOPIES!!! They are like wafer cookies with a buttery caramel layer in the middle.

Email ThisBlogThis!Share to TwitterShare to FacebookShare to Pinterest
Labels: random